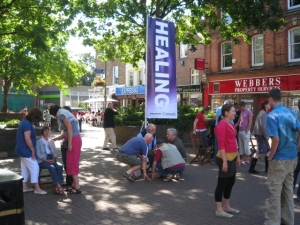 I remember a few months back, up in Aberdeen, chatting to Peter Farmer who leads a little movement called Mission Britain.  Peter has a heart to see missional ‘simple churches’ spring up in small movements across the United Kingdom.  Due to the stuff we were doing up there, he came to chat and walk round Torry with us.

As we walked, we got chatting about the mission passion of The Salvation Army which thrust the message out into the streets as well as deep into the lives of communities and indivisuals (key element of apostolic genius there…missional-incarnational impulse!).  We were talking about what the 21st Century dynamic equivalent of the open air was.  We talked around things like Open Crowd Festivals, summer fun days, servant evangelism and the likes of all those things.  Both of us had tried those over the years to varying degrees of success.

Sitting here this evening, I revisited the question and was asking what the dynamic equivalent was.  What strikes me is that whilst things I mentioned about can be good crowd attractors and communicators of a message, they can stop short of God encounters by the power of the Holy Spirit that the worship dynamic of an ‘old open air’ brought.

Not that I’m getting all nostaligic, but my mind went back to our open air campaigns (of which there were many) in Pill whilst we were the corps officers there and I remember re-launching those old things.  What was really on my heart was that worship, praise and prayer was heard and felt on the streets of the community.  Although we shared a gospel message and read scripture, to my mind the most potent thing in those meetings was the prayer….prayers of blessing for the community, streets and the people who lived there.  That was the real blessing.

I think its easy to underestimate, not only the power of spiritual warfare through prayer and praise, but prayer as mission.  Logically, its obvious that Jesus prayed as he healed, cast out demons etc by the power of the Holy Spirit according to the will of the Father. That divine communication was there.  As too was the prophetic proclamation ‘Be healed!’ or ‘Take you your bed and walk!’ or ‘Be clean!’

Today, increasingly, the ‘Jesus show’ on the High Street loses its power apart from the sheer power or prayer and praise.  However, it strikes me that prayer is maybe something that should be on the increase.  It is in the direct encounter through prayer that transformation comes.  The one-to-one offering of prayer on the streets could very well be the dynamic equivalent.

I remember with tears praying for people out on Street Pastor shifts and see God break in.  Movements like ‘Healing on the Streets’ are gaining momentum.  In a society open to the spiritual, and dare I say to the supernatural, prayer may be a way we can minister the dynamic power of an encounter with God in an age where a few hymns round a lamp-post might not do it.  Over in Canada you have ministries like Extreme Prophetic, taking prayer as evangelism to its heart.  As well as that, we increasingly are seeing prayer being offered at festivals like Glastonbury and the like.   Of course, there is the boiler room movement that has sprung out of the 24/7 prayer movement.

This week at Trinity, although our week of prayer was held inside the building, we’ve had people wander in off the streets and pray significant prayers of faith and re-dedication.  We’ve had folks from the church invite thier workmates to pray at lunch time.  Prayer cuts out the human messenger and allows Holy Spirit to do his work directly.  Yet, he still invites us to partner with him.  I wonder to what extent Christianity might regain its potency by exploring and aiding people to connect with God and his power.  John Wimber, in his books Power Evangelism and Power Healing seemed to thing that it was worth a go!

Facilitating ‘Transformational Experiences’ was out of our key values up in Torry – where better for that to happen that in connecting every day folks to God through prayer as mission.  Have a go, give your prayers legs.  Grab some warriors head out!