I started to notice my aversion to this kind of talk in ‘deepest, darkest Aberdeen.’ Distasteful language which spoke of something that had failed generations of people in that place, that spoke no hope into anything. Something that filled most people with cynicism, made them critical, filled them with detached disinterest.

You see, there in that place they were into the third generation of adults with little interest or connection with ‘the church’ and so they had nothing good to say about it. It was simply another institution that had failed them: ‘church’ and ‘Christian’ were terms beyond the pale.

Here in Gosforth things are different. The generation gaps aren’t there so much. The church invests something in the community, but the vestiges of the Christendom legacy hang on in there. Yet, still the problem persists.

The wealthy look on in condescending disinterest in their self-satisfied worlds where religion is the sign if the weak and the church but another country club. For the less-than-rich, just ridicule really…a world of their own detached from the Christian worldview.

The world is tired of ‘church’. It is tired of ‘Christianity’ and certainly suspicious of ‘Christians’. Even in places where it works, where it is remotely meaningful, there is indifference towards the church. People don’t care what happens in our sacred buildings.

I have a growing conviction that, whilst there is nothing intrinsically wrong with the words, ‘Christian’, ‘church’ and ‘Christianity’ they are not the most useful terms. They are loaded terms -negatively loaded terms – for lots of people in our everyday worlds. They can be readily replaced with dull, grey, boring irrelevant.

People are, however, interested in Jesus and God (regardless of their understanding of those names). I wonder if its time to lay the aside for a season…maybe until such times as we can paint a new vision.

Biblically, of course, the ‘Christians’ were only known as such by their critics and were more readily identified as ‘the Way’. Simply, Jesus didn’t start an ‘ianity’ in his name he invited people to follow him, to follow in his Way. Not so much a set of dogma to adhere to, but a lifestyle to live.

People still want that. It is why Buddhism is so popular – they offer a way of life more liveable and life-giving than sometimes the people who follow the one who called himself ‘the Life’ do!

So, I’m changing my language. What difference would it make to our mindset and the mind of the people if we framed our life as being ‘followers of Jesus’. What if instead of speaking if church we speak of ‘the movement Jesus began’.

Well, true. It might not make a huge difference, but I believe it would continue to remind me that our identity is in him and that together we are still seeking to be the continuation of his Kingdom movement.

The biggest message that has been impressing itself upon me from various directions is that of the balance of three ‘movements’ of life. It is very much discernable in a whole variety of neo-monastic writings (such as ‘A Passionate Life’, ‘Cave Refectory Road’ and ‘Reaching Out’ and others).

By ‘movements’, I mean our movement towards God (UP), towards others (IN) and towards the world (OUT). Others use a triangle to emphasise this balance between these movements in our lives. 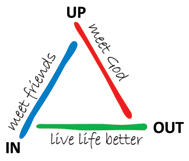 – ‘Cave’ is the place to which we draw away from others and our mission in the world to seek God, to pray, to engage with our Creator.

– ‘Refectory’ arises from the monastic practise of the common meal, the place of hospitality as mission but also as deepening in relationship and discipleship. We find emphasis on the value of shared meals and the powerful Kingdom image of feasting.

– ‘Road’, then, is our mission to the world…our ‘going to make disciples.’ Our engagement with the world as a spiritual discipline as much as an adherence to the call of Jesus.

It is not to difficult to see this pattern clearly in the life of Jesus and the movement he began. Secluded prayer, table fellowship, itinerant disciple making on the road with his talmidim/apprentices.

In post-Christendom UK, our world needs to discover not a ‘system of beliefs’ but rather a way of life. Author Brian McLaren makes the observation in his book ‘Finding Our Way Again’ of the rise in popularity of Buddhism amongst spiritual seekers and suggests it is because a Buddhist’s ‘path’ is about life rather than dogma.

Like the disciples of Jesus, waiting to follow the first Rabbi who would call them, so our world listens to the peaceful way, whoever offers it. Yet, here we are, followers of the Way of Jesus, the Way of love, investing more energy in church survival than much else.

I wonder what those dimensions look like in your life? Your family? Our Jesus communities and in our world?

A great Old Irish word is Cymborgi…meaning ‘Companions if the Heart’…like an ancient Band of Brothers/Sisters. Who today might commit to such a thing? I would.

I’ve been laying relatively low on the blogging front of late.  There has been a lot going on with regards our future. Many of you will have grasped that I’ve only just begun a 5 year (extendable) appointment as Ministry Team Leader at Trinity Church in Gosforth (a Methodist/URC parnership church), having been leading in the interim following my colleague’s departure in January this year. It has been difficult to say much as that has all been going through the appropriate channels.  The job also takes up a fair chunk of my time, as you may imagine, in that its a large church of around 350 members plus another 150 adherents as well as the folks on the fringe.

The church have been brave (and even naughty at times) in appointing me as I am neither a Methodist Minister or a URC minister…or, come to think it, of any other denomination! (Which I don’t mind at all!) But…the church had a sense of what should happen with regards leadership and have pursued that.  Its all finalised and we’re looking forward to what God will do.

There will be a great deal of my friends and blog-readers who will think I’ve gone completely mad, especially if you know some of my views on leadership, church, mission, clergy-laity divide and all the rest.  I think the amazing thing for me is that I work in a community which is willing to learn from people who are different to them, both at Trinity and in the wider networks we are a part of.

We are pursuing a mission-focussed, multi-voiced, non-heirarchical leadership model with five-fold ministry teams guided facilitated by me and several others…we’re at the beginning of an exciting new stage of development.

Leaving all that aside, I’m simply so grateful that God is taking who I am and using it for his Kingdom.  The legacy of Salvationist spirituality is very much still mine, but enjoying so much valued input from other streams of understanding…specifically neo-monastic thinking and practice but more than that, Jesus.  Inspired by the Anabaptist tradition, I’ve been seeking to reorient my life around Jesus.  That might sound weird, but I’ve been surprised how easy it is to make our Christian lives about other things!  This has been liberating, not just for ministry, but in my personal life.

So, there are several ideas/things that have been ‘bloggable’ floating around of late….I hope to get going with those soon.  Bye for now.