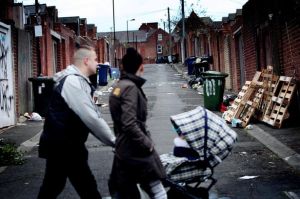 A ‘Newcastle Chronicle’ image from Benwell/Elswick

Spending the day in Elswick and Benwell yesterday has been really useful.  I had opportunity to speak with the leader of a key church-related project in Benwell, who have been in the community since 1987.  His insights were really helpful and helped clarify a few things about the work I’m going to be doing.  Partnership is important to me, and it was good to have a positive exchange with him.  A few things I had already suspected were confirmed:

There are so many other things I could reflect on, and I will in time, but just visiting with a fresh set of eyes this week has highlighted so many key parts of work that can be done to transform some aspects of life alongside the folks who call those communities home.

There exists in these communities what can best be described as ‘broken shalom’.  If I were to pray ‘your kingdom come, your will be done on earth as it is in heaven’, then my only response and answer would be to actively work to bring healing to the broken shalom.  Whilst I hope that personal relationships will mean folks finding personal restoration and salvation in the fullest sense, it is also true that the whole environment needs a lift.

They’ll rebuild the old ruins,
raise a new city out of the wreckage.
They’ll start over on the ruined cities,
take the rubble left behind and make it new. (Isaiah 61:4 MSG)