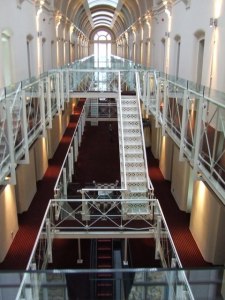 Had a wonderful moment today that I just had to share. I was in HMP Aberdeen for our chaplaincy team meeting (I’m just about to be on the staff there as a part time chaplain although I’ve been a volunteer chaplain there for about a year). We were talking about the fact that due to some structural and timing issues, one of the wings wasn’t being opened up in time for the prisoners from that wing to come to the ‘chapel service’ on a Sunday morning. Attendances had taken a dive from around 25 to maybe as little as 4 each week.

Having thought about several things, one of the Church of Scotland chaplains comes away with an idea that I’d never have expected him to come up with. ‘Lets forget about having the service in the chapel and go and do it in the public arena of the hall where the men are.’

The conversation had so long been about how we get people to come to the chapel service in the environment where going to church isn’t the done thing to be seen doing. The first ‘open air’ in the halls will be 20th December!

Then came the next idea. ‘Lets give up some time on a Sunday evening once in a while and go into the halls and eat with the men.’ And I am there quietly shouting ‘amen, hallelujah…now we’re getting the idea!’

We are looking forward to seeing the Kingdom advance in Aberdeen prison. We had a wee chat with the Governer and she was supportive. Result!